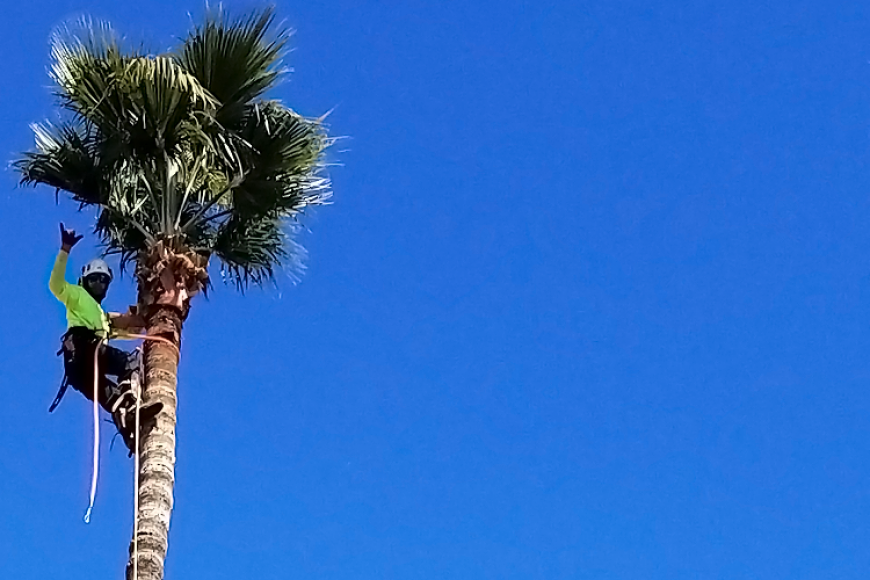 The Best Time of Year to Prune Your Palm Trees

Well, we’ve approached Palm pruning season once again and the heat that comes with it. We generally begin pruning Palms beginning June and lasting until September depending on the species and rate of maturation. This time frame ensures that the messy seed pods are eliminated with one pruning. If Fan palms are pruned before June, they often run the risk of late emerging seed pods or inflorescence.

In the heat of the summer, the least amount of time you spend up pruning the palm, the better off you are when it comes to dealing with high temperatures. One way to reduce the time spent pruning certain Palms is single rope technique. With an SRT system, a climber can ascend the rope rather than the palm trunk allowing instant access to the upper crown, and immediate descent on completion of pruning.

Another advantage of SRT on Palms is the ability to prune the palm “spikeless” eliminating harmful and unsightly gaff marks on the trunk that can accumulate over time. These wounds won’t compartmentalize as a tree would and so will be there for the life of the Palm. Sometimes spikes are still worn to provide climber safety while performing the pruning operation. However, care can be taken as to minimize the damage during the climb.

Another common practice for SRT in Palms is climbing palms with more than three years annual growth. These trees are considered hazardous and should only be pruned from the top down to avoid palm skirt failure which can be fatal.

These videos highlight a couple examples of Palms that were approached with SRT to either avoid trunk damage or improve efficiency.